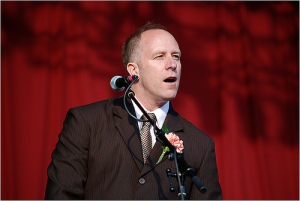 Faith No More keyboard player Roddy Bottum celebrates his 46th birthday today. The classically trained musician was one of the founder members of Faith No More and has also performed as front man of Imperial Teen and has composed music for films, TV and documentaries notably the movie Adam and Steve.

In tribute, here’s Roddy at his best for Imperial Teen and FNM

Next up a compilation of Roddy’s best bon mots over the years – Roddy in his own words:

On Faith No More
“Faith No More is a good place to be, but there’s only so much input you can have as an instrumentalist in a band. I needed to express myself in a little bit more clearer terms. So, words, lyrics and message were important at the time we started doing the Imperial Teen thing … And I’m playing with people I am really close to.”
Oasis magazine, July 1996

“We don’t have a problem with that. I think it’s kind of what we’re best at – confusing people.”
Des Moines Register 1992

On Jim Martin
“Jim was very good at whatever Jim did. Getting rid of him was a real cleansing exercise, we were all very uptight with him.” [Was it a nasty split?] “It was very simple. We did it by fax.”
Unspecified European magazine 1995

On his sexuality
“I’m gay, and I’m open to that. But it’s just an uncomfortable feeling to be pigeonholed in any way,” he says. “Although, I am gay. I’m certainly not embarrassed about it. I’m proud of that. Being called any one particular thing, even if it is what you are, is sort of limiting.”
Oasis magazine, July 1996

“I would never have thought as a gay teen I’d be in a band that would be considered heavy metal or hard rock.”
Advocate magazine, August 2001

On Roddy
“I’m a fucked-up individual.”
1995 interview with Phil Sutcliffe, republished on The Quietus, describing a troubled year.

On touring
“I haven’t given it a lot of thought. I’m gonna try to just jump right in. If I think about it, it’s gonna make me miserable. I wanna get on the plane, no suitcase, I don’t want to be carrying a lot of stuff round Europe, just go with a couple of shirts and see what happens. Wouldn’t that be cool?”
1995 interview with Phil Sutcliffe, republished on The Quietus

“People like to ham it up. It’s their life, you know; if it isn’t really torturous, then what have they been doing all these years? To say that it hasn’t been torturous means they haven’t been working hard. So of course they have to act like it’s really horrible. That just implies that they’ve really been working hard all this time.”
Interview with Italian magazine Rockerilla November 1994

On the Internet
“It’s just a big bathroom wall. Stupid comments… But there’s some specialty groups that are pretty interesting. I went into these literary groups a couple of times, they were interesting…”
Interview with Italian magazine Rockerilla November 1994

On songwriting
“It’s always been really democratic. Most of the the songs this time [King for a Day..] I think started with Billy [Gould, bass player], playing with his computer setup, bringing in ideas, and we’d all kind of work around them. Billy has a really good ear, for keyboards especially, and he plays a lot with guitars; he wasn’t bringing in just bass ideas or anything.”

“I think I can take certain songs to a certain point, and then I start questioning myself, and then I’ll usually look for someone else’s input. I always like a drummer’s input. Dynamics really interest me.
Interview with Italian magazine Rockerilla November 1994

On Courtney Love
“Courtney and I have been friends for over 20 years and we have a mutual respect for each other’s craft…She’s a total professional and compulsively fixates on a project until it’s perfect.”
C0ntact Music March 2005

On Kurt Cobain
“I really loved Kurt and we got along really well.”
Rolling Stone June 1994

On how he got into rock music
“Drugs..San Francisco (smiles) I moved to San Francisco when I was about 17 got mixed up with a shitty crowd and here I am.”
Interview with UK TV station Channel 4 July 1997