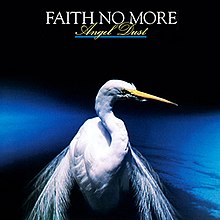 A little late to the party on this one but 8 June marked the 20th anniversary the release of of Faith No More’s Angel Dust. Cited by bands and critics as arguably the most seminal metal release of all time, it was and remains a remarkable record. Certainly, it is an album that I loved and lived with for two decades now and each listen continues to offer up new insights.

Brilliant lyrics, crunching guitar, trademark FNM rhythm propelling every track, intelligent sampling and vocals that announced the maturity of a master voice, the record has rightly been richly feted this week and I would like to add my own tribute.

Time-stretched as I am in Warsaw, I will restrict myself now to a compendium of anniversary articles.

Stereogum
(Brilliantly written, this one really resonates with own experience)
“Faith No More used to get the “alternative metal” tag in the magazines I was just starting to read, but the form of stomp-rock iconoclasm that exists on Angel Dust was light-years removed from the grunge revolution that was happening elsewhere. Instead, it’s a dizzily omnivorous thing, one that delights in shoving listeners’ heads into its excesses. About 40 seconds into the juddering groove of opening track “Land Of Sunshine,” we hear stereopanning, multitracked, echoey evil laughter, one of the creepiest things I’d ever heard at that point. “Be Aggressive” has cheerleader chants. “Jizzlobber” ends in straight-up opera. The album’s final track is a cover of the impressionistic instrumental score from Midnight Cowboy, a movie I’d never heard of. With kickass first single “Midlife Crisis,” Faith No More found a way to land in the pop charts with a song that includes a line about “your menstruating heart” in its chorus. I had no idea what the fuck was going on with this thing.”

Gun Shy Assassin
“It changed things for Faith No More. Forever would they become associated with the disc, as most of us fans consider it their finest hour.”

No Crowdsurfing
This reads as a real labour of love and is both detailed on release specifics and deeply personal.

Freaks, Geeks and Gigs
“How can you stay static when you hear the first riffs of “Land Of Sunshine”? How can you not jump off the floor while listening “Midlife Crisis”? How can you not yelling out during the crazy thrash metal-like moment of “Malpractice” and/or “Jizzlobber”?”