It seems that new Faith No More song Matador – as played in the 2011 and 2012 reunion shows – may be the extent of new material from the band. In the course of a Mondo Cane promotional interview with leading Australian site news.com.au, FNM lead singer Mike Patton revealed that any further new material is unlikely.

He said: “We’re pretty happy with just touring. There was talk, ‘Should we write new stuff?’ and we all looked at each other and said ‘Nahhh, f— it.’ We did work up one new little thing [Matador] and that was really energising.”

Between moving apartment and baby scans, I’ve been a little distracted lately but here is a long overdue Faith No More digest.

We’re being spoiled by pro-shot video today. Here is the Malta Festival‘s own video of Faith No More performing Delilah – originally by Welsh crooner Tom Jones – from July this year in Poznan, Poland. 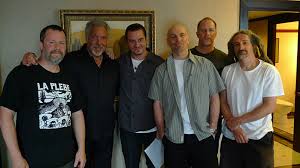 This was a great show and its wonderful to finally have at least 22 minutes of pro-shot TV footage of Faith No More‘s Belgrade Calling appearance, which took place on 28 June.

* Had never quite noticed before how different Jon’s guitar sounds on Land of Sunshine.