It is non-stop Faith No More news at the minute and here’s the latest long round-up.

First up a bit of site news. We’re teaming up with FNM Followers to try to bring a better service for fans. There will be no dramatic changes here but we’ll be using the expansive FNM Followers Facebook network to spread news direct from here and we’ll be working more closely so we’re not chasing our tails after the same info etc.

It can sometimes be hard to accept that not everyone is a Faith No More fan. We see artistry, diversity, pugnacity, inventiveness; they see inconsistency, ADD, contentiousness and self-indulgence. And the Portland Mercury join the ranks of The Guardian, Caitlin Moran (even if we love Raised by Wolves) and Rolling Stone in giving Faith No More a kicking in a review.
Here are some choice extracts courtesy of Mac Pogue:
“All of this adds up to a show that is… kind of shitty. I don’t know, have you ever heard Faith No More? They rule on record, and “Epic” transcends the domain of rap-rock and sits among “Norwegian Wood” and “One More Hour” in the domain of Great Fucking Pop Songs. But for a continuous hour-and-a-half, their lounge/heavy metal/funk genre mashups aren’t exactly my idea of a great time. While “Epic” makes a serious play for pop immortality, the rest of the catalog preys on John Zorn-ian genre mashups intended to discomfort, and, well, that’s not super fun.”

“Patton is about as charming as a man with slicked-back hair, wearing linen pajamas, and grabbing his crotch can be. His dumb jokes about impregnating a female fan chafe, compounding his already menacing sexual presence, as he chortles about Portlandia (please remind me that Portlandia exists). Patton grins through an auditorium-wide sing-along, and I’m struck with the inevitable paradox of international superstar “alternative” bands: If Faith No More is playing a sold-out 3,000-person show, what is this the alternative to?”

The writer – after arriving late and laden with his own peculiar prejudices – makes a big play of Patton’s supposed man-handling of a female fan. Patton and Faith No More can be accused of a lot of things but overt masculinity is certainly not one of them. And anyway judge for yourself below and behold the FNM front man’s “menacing sexual presence”. Mac, Pogue ma thón.

When he’s not feeling up female fans and demonstrating the band’s masculine id (Portland Community College Psychology 101 pays off Mac!), Mike Patton – probably in some misplaced display of an unhealthy masculine pathology bordering on psychopathy – likes to stage dive, no doubt copping a feel as he goes. Here he is in fine form at the Warfield last night (video courtesy of videographer supreme lullysuv and via bungleweird)

And faithnomore4ever inevitably have a brilliant Instagram of one of the dive.

And bungleweird have also highlighted some beautiful Sol Invictus and Faith No More inspired artwork from Jonathan Chater.

Check out more of Jonathan’s art

Some less sensitive reviews this time – from the band’s tour opener in Vancouver:
Pop Matters
“Here is the strength of Faith No More as a live unit: for a band still riding high on reunion hubris, whether they’re playing brand new and exciting tracks, or time-honored classics, Faith No More still seem invigorated to be up there playing. It’s still fun, it’s still exciting, and it never once seemed forced or paint-by-numbers.
Beatroute
“Playing a 20-song career-spanning set, Faith No More had the energy of a band 20 years younger and Mike Patton was as caustic and witty as one would hope. This is not the sound of a band cashing in on a reunion tour. This is the sound of a band with revitalized energy and a new purpose, and the more people they make cringe and/or question their sexuality the better.”
And one article covering both Vancouver and Seattle from Hellbound:
“Did the band live up to the hype and the anticipation of the thousands of fans in the room? Abso-motherfucking-lutely. If the band was feeling any pressure, they didn’t show it. And they certainly did not perform as though it was opening night—it was clear from the get-go that Faith No More had already hit their stride. Patton was bounding, gesturing, squatting, roving in circles, lunging forward and backward, conducting the flow of the music and punctuating well-trodden songs like “Midlife Crisis” and “King for a Day” with looped vocal samples, bullhorns and other vocal distortions controlled from a small station at the centre of the stage.
“The new material was a welcome addition to the set. There was also a notable energy and engagement to the band’s performances of “Superhero” and “Sunny Side Up.” It has been said that the band is 100% behind the new project, unlike previous albums where there has been some division between members. It shows in the performance.”

French magazine MYROCK has given Sol Invictus a 17.5/20 score in its review, concluding that “Sol Invictus is a solid album which validates definitively the reformation of Faith No More.” The magazine also features an interview with Mike Bordin in which he compares Faith No More to five haute cuisine chefs: “Mike [Patton] is the most creative leader that I know… And also the most crazy. He uses ingredients that nobody would dare and mixes together and ejaculates on a slice. Imagine, for example, a sushi rolled into secretions (laughs). It may sound strange at first, but in the end the taste is incomparable, he is always in search of a new way of doing things.”
(Info courtesy of Steven Dreams from the French Faith No More Community)

And French site Bring Me the Sound has also given Sol Invictus a review and declares it only a qualified success. The reviewer opines that Sol Invictus is too much more of the same from the band and lacks any new direction with the review entitled “Chronic nostalgia”. He concludes: “We must lower our expectations and savour what is offered us and that an average offering from Faith No More remains well above what we can find offered to us today. But something totally bare that maybe we would hate but which would at least come from the group’s desire to try something else, that we would be ready for. Think about it genetlemen.”

Brazilian site Rock on Board has given Sol Invictus a 4/5 review. And the reviewer makes the opposite point to the French reviewer above: “It is virtually impossible – and unacceptable – think that Faith No More can still surprise someone today. Anyone who knows the history of this band, you know it’s a mistake to create any kind of expectation, and we should never expect anything from them – in the good and in the bad sense. Yet the first hearing of Sol Invictus , the group’s first album in eighteen years, is still able to cause the most diverse – and strange – sensations. Except for The Real Thing , all other group’s records with Mike Patton had this ‘trademark'”. The reviewer adds: “Sol Invictus is not a heavy rock record, but it is rich in textures and bright vocals.”

The Seattle Music Insider has a brilliant gallery of Faith No More’s show at the Paramount. Check it out.
Here’s one we borrowed:

And friend of the site Thiago has also produced some brilliant pics from last night’s second show at the Warfield. 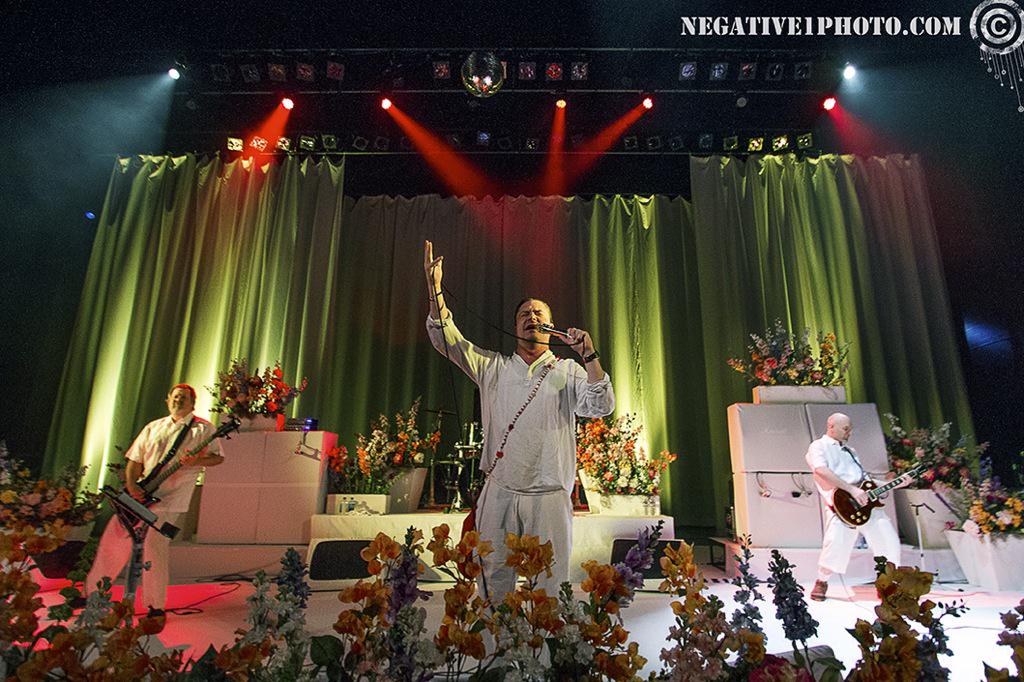