Buy Faith No More book Small Victories in the UK

Some retailers have already Small Victories on sale today (27 August) one week early, while the rest will have it on sales on 3 September, when the ebook edition also goes on sale.

Here’s how and where to pick up Small Victories in the UK.

Try your local bookshop. If it is an independent shop, they should will be able to get it in. Or you can order through Hive, and then pick it up at your local shop.

For Waterstones, if you click and collect online you can pick up in one of their stores. They may also have some on their shelves. Ask – and please ask them to order in more.

WH Smith are unlikely to have them on their shelves except in their biggest stores. But order at your local store or online and they’ll get it in.

Foyles have copies in their Charing Cross store in London. 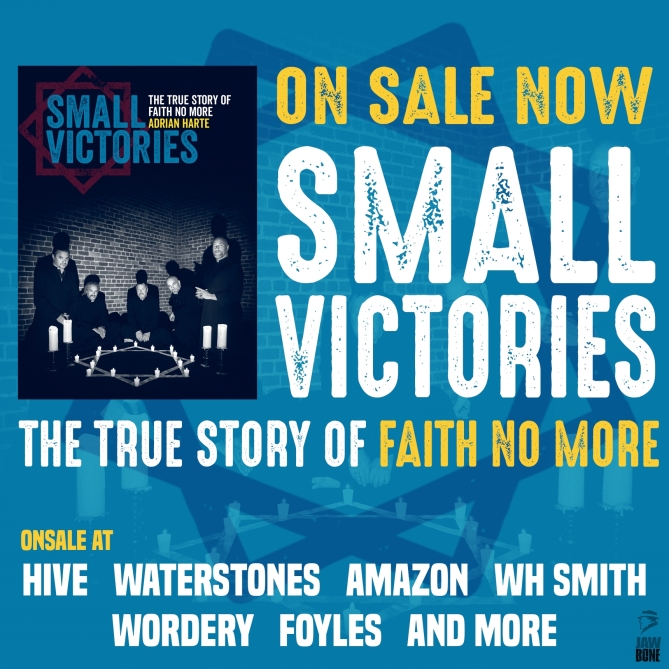 Watch out for dodgy fake pdf versions online. They are riddled with viruses and fake.

Also, try not to buy from “used book” websites on Amazon or elsewhere online. The author – me – gets nothing from these sales.

Links for a Day 206: Latest book news, and some band news

Publication date for Small Victories in Europe and the UK  (3 September) is just two weeks away, so coverage is cranking up.

First up, I spoke to Mark Montague and Steve on The Last Transmission on Phonic FM last Friday night.
You can listen to the whole show below, and I speak for around 30 minutes from 1:00 (one hour) in:

I also spoke to the Sports Journalists’ Association in the UK about the book. Check out the piece here.

Like many reporters who have moved into production or PR, I still felt the urge to write. The site helped with that and also keeping on top of emerging media technologies, but following the release of Faith No More’s comeback album in 2015, I felt a nagging need to tell their story.

In case you missed it, Planet Rock gave Small Victories a rave review in their latest edition:

All ebook editions of Small Victories will be on sale and available everywhere on 3 September. You’ll be able to get them on that date from Kindle and the Apple iBooks store and other stores, and they look wonderful.

Lastly, on the book – how you can help and where you can buy.
Please order now at your local bookshop to make sure they will have on their shelves by the UK/Europe launch date on 3 September.
Amazon: http://geni.us/YdG3
Waterstones
Hive
Fishpond
Barnes and Noble
Indiebound
Indigo
Foyles
Wordery
Eason’s

Mike gave a very wide-ranging interview to Den of Geek on his film work last week.

I’ve been in a band for, ugh, many bands, for 30 years. So, to me, making a soundtrack is something that is close to my heart. I’m a big fan of film composers, but also, it keeps me at home. It’s not a new band that I have to tour, so absolutely, I hope I can do more.”

Bill Gould will be joining Wayne Kramer on tour for three months as part of MC5, or MC50 as the 50th anniversary tour is known. Bill will play a host of dates in US and Europe in September, October, and November.
Full tour dates here.