Faith No More brought the curtain down on the third leg of their Sol Invictus North American with a headline slot at the Heavy Montreal Festival. The band returned to the Quebec capital exactly 23 years to the day since they last played the city as part of the Metallica/Guns N’Roses tour and the famous riot.

There was no shortage of reviews for the tour climax:

It’s hard to conjure the beatific command that Roddy Bottum holds, standing over his keyboard like a preacher at his pulpit. It’s difficult to explain the chemistry between Jon Hudson and Mike Bordin and Billy Gould, tossing the focal point of a song between them effortlessly. And it’s fully impossible to explain what it is like to watch Mike Patton howl, shriek and contort on stage, his slicked-back dark hair becoming wilder and more sweat-soaked with every song. Patton was in a mean mood: “Motherfucker,” which they opened with, sounded like even more of a threat than usual, and there was something pointed, even cruel, about his delivery of the bit of “Power of Love” by Celine Dion that served as an intro to “Midlife Crisis.”

After roughly 23 years, Faith No More has finally played in Montreal again. Obviously, this time they played Heavy Montreal and headlined Saturday’s lineup with one hell of a performance. A performance that schooled many younger bands, to be sure. And if you’re a fan of heavy and dominant bass, then you were in love with Billy Gould’s presence last night. Yes, the bass was dominant, but it wasn’t distracting (OK, maybe a little because it was so cool and I’m writing about it), and it certainly wasn’t the only thing to be heard.

They continued the evening with brio, the musicians were clearly on form Patton’s voice was powerful as he wished, illustrating the richness of his register, and drum and bass playing was rhythmic and solid. The group concluded the evening with “Ashes to Ashes”, during which Mike Patton threw himself into the crowd, and “Superhero”, where he asked the crowd if they wanted a Lenny, before offering Montreal its very own #penisgate.

The first half was punctuated by a tremendous Epic and dead-crowd time between songs. Weird. Then came the Easy cover, Midlife Crisis with a Céline bit (oui) and a growing bond. And the band, anchored by Billy Gould and Mike Bordin on bass/drums, and Bottum’s… well, it was either dry wit or sincerity – drove the point forward while Patton worked through all the gears on his stentorian voice. As the set proper ended with massive Ashes To Ashes and Superhero and Patton in the crowd, momentum had utterly turned in the band’s favour. Cue an encore built around a gorgeously brawny This Guy’s In Love With You. Ultimately, the climactic ending to Just A Man, with Patton goofing around Bugs Bunny/Leopold-style, took them 9 minutes over time – the only band to do so all weekend.

CONCERT: Faith No More at Toronto setlist, video and poster

Faith No More’s penultimate North American Sol Invictus tour date saw them return to Canada. The band again played an 18-song set and threw in some snippets of Drake and Van Halen.

Motherfucker
I Started a Joke

We Care a Lot

Part 2 brought to you by Invictus wine

CHARTS: Faith No More hits top 10 in France, #2 in Czech Republic, #9 in Canada and more

The latest French official SNEP album charts have just been announced and Faith No More’s Sol Invictus is a new entry at a frankly astounding number 10.

France is certainly not a rock heartland  (apologies to Bertrand, Stevan and Nessie) and the French charts are normally dominated by local and at least francophone artists, so this is another significant charting for the band’s seventh studio album.

Indeed, the album is the only non-francophone title in the top 19 of the charts – Snoop Dogg makes it in at number 20. Again kudos to PIAS France who did a good job promoting the album in France. I’m now hoping the band can follow up this interest with a a French TV appearance with Canal Plus’ Album de la Semaine the dream.

It is Faith No More’s highest-charting album in France – with Album of the Year having peaked at number 17.

Strangely, the album is number 11 in both the physical and download charts but makes it to number 10 overall.

The charts have not been published but Sol Invictus will debut at number 9 in the Billboard Canadian charts.

Sol Invictus has entered at number 23 in the Spanish album charts.

Exclaim! are exclusively streaming Faith No More’s new album Sol Invictus in Canada from Monday 11 May – and it is now live.

This is what Exclaim! say in their quasi review:

Sol Invictus, the long-awaited follow-up to 1997’s Album of the Year, was recorded by bassist Billy Gould at his home studio in Oakland in 2014 and early 2015, and features the band getting up to some of its old tricks.

Early preview “Superhero” is a vicious affair, rife with chunky metal licks, atmospheric keyboard lines from Roddy Bottum, and Mike Patton’s masterful blend of passionate croons and mad dog barking. Elsewhere, “Sunny Side Up” starts out as a deceptively upbeat slice of wah-wah-employing soul rock, but the band do serve up a metallic chorus that’ll fry your brain.

“Matador” mixes rolling drums, a near-operatic performance from Patton, and elegant, cascading pianos into its epic arrangement, while closer “From the Dead” is a shimmering finale of tambourine taps, California sun-smooched backup vocals and afterlife-minded allegory.

Sol Invictus is released in Canada on 18 May.

Faith No More returned to Canada for the second time on tour with a killer show in Toronto. 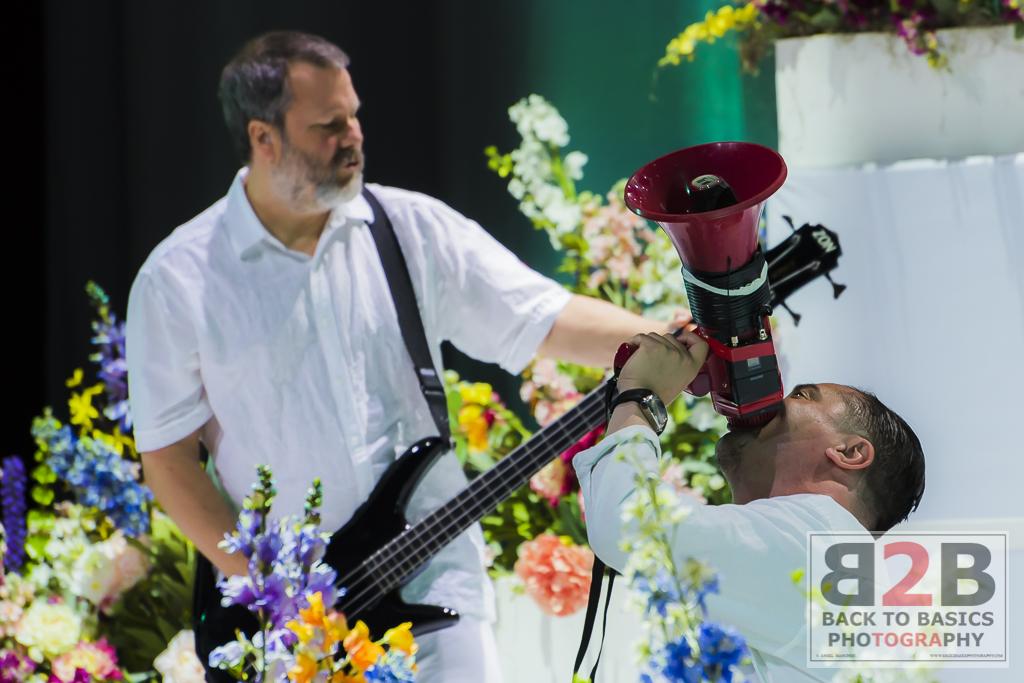 An amazing gallery here from Back to Basics

The regular edition poster is signed & numbered edition of 115, there will be around 100 at the show signed by the band. There is also a foil variant edition of 20.
Both Chicago and Toronto posters will be available via Secret Serpents at 9:00 AM PDT on Sunday May 10th
Setlist

Matador
Digging the Grave
I Started a Joke

#MikePatton “a peace offering to Canada, since they fucked us at the border today!” Set List @FaithNoMore @CMW_Week pic.twitter.com/SmIXjz6364

Roddy Bottum’s latest interview with the Toronto Star might serve as something of a dampener on exlectations of immediate post-Sol Invictus material from the Faith No More.

“Q: So do you think there might be another Faith No More album or two lurking in the kitty?

Roddy: Not really. I mean, when we made this record I think there was something like 25 songs and we released 10 of them. I’d like to think if we went and made another record it would not be songs from this session. There’s a lot of material there, honestly, but I don’t really see putting it out other than in some weird, obscure form. If we make another record I would like to go back into the studio with new stuff. This, the Sol Invictus record we just released, is very era-specific.

And Roddy also shares some new insight on Sol Invictus (you know the new album that has not been released yet but some of us – mea culpa – are guilty of looking beyond):

Q: Was there any kind of master plan heading into the new album?

Roddy: The only design was kind of getting back to our roots and addressing what we started with. We didn’t have any motive to get on the radio or play into today’s standards or work within the spectrum of corporate-rock America. The intent was just to address who we are as people and what we’ve done in our past. It was overthought but never over-spoken. Maybe people were thinking about stuff going to sleep at night, but there was no grand design. It was nothing that we came together and talked about or anything.

The reviews are in from Faith No More‘s Sol Invictus tour opener in Vancouver:

“It was a bizarre, carnival-esque rebirth peppered with Patton’s punk-metal growls and characteristic sense of humour, and mixed with Faith No More’s genre-bending style of rock. Epic? Certainly.”

“The blend of old and new would prove to be a theme throughout the night. Oddness was another: the band’s flair for the weird reflected in both Patton’s between song banter (“Anybody got an espresso maker around here?) and new tracks like the Radiohead-tinged minor key “Sunny Side Up.”
Not to say that Faith No More weren’t firing when the moments to rock hard and heavy were due. A pounding “Epic” arrived just six tracks into the night, and a brilliant “Midlife Crisis” followed just four songs later, amended and extended by a funky breakdown halfway through as Patton channelled a bizarre version of James Brown, “Hit me one time! Hit me two times! Hit me 18 times!”

Photo gallery this time but some text too: “After a song to shake off the new-tour rust, the whole band was firing on all cylinders. Mike Patton absolutely blew me away. His vocals, his charisma, his amazing intensity, it was all just so perfect. I waited many years to see this band perform, and I was humbled by their display.

Faith No More kicked off the first leg of their North American Sol Invictus in Vancouver.

We Care a Lot

Holy SHIT! That was a once in a lifetime opportunity to see these guys put on a flawless, get up on your feet and rockin show! #faithnomore in Vancouver just awesome what can I say…it was #epic #legionofboom #livemusic #mikepatton

Faith No More to kick off Sol Invictus tour

Faith No More embark on their first full scale North American tour since 1997 when they play the first of 16 dates on the first leg of the their Sol Invictus tour.

The band return to Vancouver and Canada for the first time since October ’97 for their tour opener at the PNE Forum.

Support is provided by Christeene – “a gender-blending, booty-pounding, perversion of punk fully equipped with an arsenal of ferocious music intertwined with raw moments of strained intimacy and fiery stank.”

Speaking of the tour, Bill Gould said: “Here we go. North American tour dates, some in cities we haven’t played in over 17 years. We are armed with the new material and ready for whatever comes our way.”

And about Vancouver, he told the Vancouver Sun: “When was the last time we were in Vancouver? 20 years? I mean, shit, I don’t even know what Vancouver looks like any more. I mean, it’s probably changed a lot.”

With the release of Sol Invictus, attention will be focused on how much new material the band will play on the tour. Fans have so far only heard singles Motherfucker and Superhero and Matador and Cone of Shame live. And Bill told the same paper that we may only hear a few more: “We’re definitely going to put in a strong handful of new material — minimum three to five songs. We want to keep the energy high too. People haven’t heard our songs in 20 years. We’d like to give some of that too.”

We’ll have updates throughout the tour and one round-up (video, setlists, reviews and social media) per show. But with the time difference to Europe, there may a few hours delay.

Here are the dates of the first leg of the Sol Invictus tour: