Faith No More at Sonisphere Italy: videos and photos

I’ve finally got my two videos from Faith No More at Sonisphere Italy uploaded and here they are in all their shaky glory.

Here is Mike throwing some shapes during Midlife Crisis. Not sure what he was actually doing with the glass lighting(!) panel – I thought he had someone tablet at first.

Encore of Sol Invictus and We Care a Lot

These mostly focus on the other San Francisco band at the festival and the poor organisation and crowd management that Milan festivals seem to specialise in. Personally, I got in and out with no major hassle but it was very difficult to move around inside, almost impossible to escape from and enter the gold circle area while there were long queues for everything and I didn’t eat all day. And there were very few spots offering shade in the 35C heat..
From a Faith No More perspective, the focus is on (a) Patton’s swearing (b) Patton’s fluent Italian and (c) Patton’s swearing in Italian.
Rolling Stone
SoundBlog
Metal Skunk
Daring to Do (focus on complaints from concert-goers)
Metal in Italy (more fan complaints)

Faith No More at Sonisphere Milan setlist and more

We were live at the Alla Assago Arena for Faith No More at Sonisphere Milano.

Faith No More delivered a scorching set to match the tropical weather and won over a largely Metallica crowd with a combination of good humour, some of their heavier cuts, Mike P’s fluent Italian and impressive vocabulary of swear words and some simply stunning live playing, stagecraft and showmanship.

Even in front of a festival crowd, Faith No More played five tracks from Sol Invictus while Spirit also got a rare outing.

Some other San Francisco band are playing after the main event.More later

Faith No More’s third date for the European leg of their Sol Invictus tour takes them to Milan on Tuesday night for Sonisphere Italy.

Once more, Faith No More go on stage right before Metallica but at the slightly later time of 19:15. 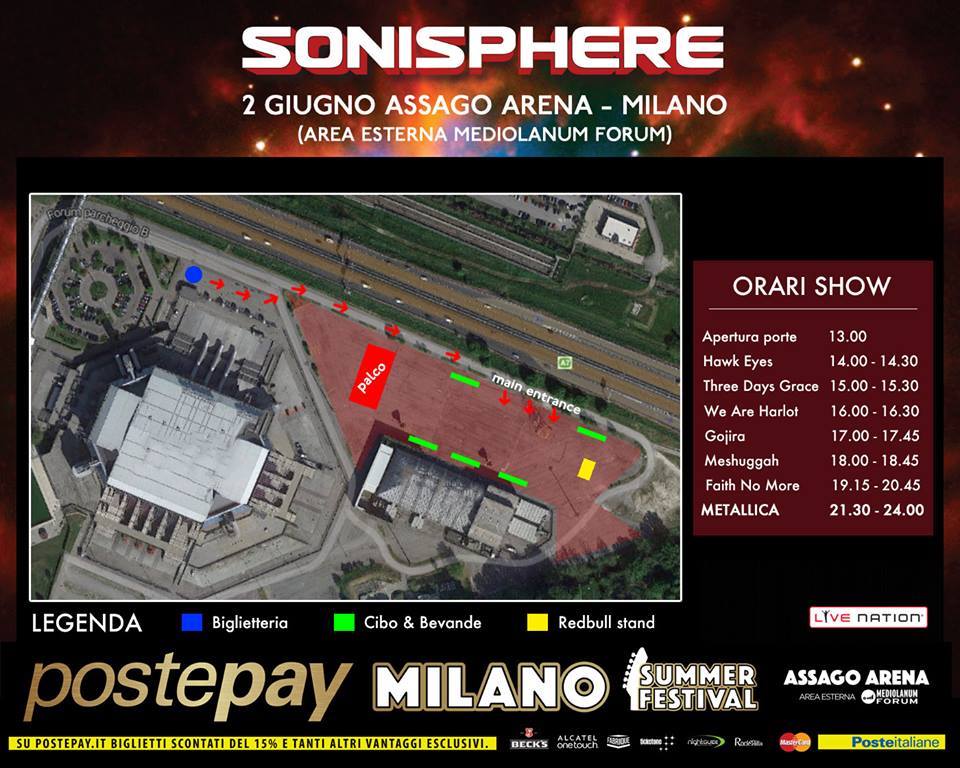 CHARTS: Faith No More Sol Invictus debuts at number 4 in Poland, 20 in Italy

Sol Invictus is the highest new entry in Poland and the fourth-highest in Italy.

LISTEN to FAITH NO MORE SOL INVICTUS stream: Find out where you can listen in your country

Here is where you can listen around the world from 11 May:

Links for a Day…(vol. 172): Chile fest, interview and reviews

Bill Gould’s latest interview is with the Boston Globe and he has once more found something new to say and he has some good life advice here:

“We could just make music like people. There are these rules — ‘This is how you have to do it.’ ‘You’re getting back together; you have to make an album to capitalize on your tour.’ There are a lot of things that people have to do that I don’t think you actually have to do. I think what you have to do is remember that you’re doing this because you like to make music, and not for the payoff, or for the business side of things. I think if we looked at it [the latter] way, we wouldn’t have made the record that we made.”

The Globe also has a good take on the album:

“That record, which comes out in the US on May 18, is hard to describe without getting self-referential. Faith No More’s rearranging of musical ideas is clearly the product of its members’ minds working together in idiosyncratic ways, and “Sol Invictus” continues down that path, from the way “Sunny Side Up” melds together Patton’s ceiling-scraping yawp and Jon Hudson’s hip-shaking funk guitar to the charging drums, glittering keyboards (played by Roddy Bottum), and backing bellows of “Superhero.” It’s not the type of “reunion record” that tries to retrace steps previously trod by the band; it’s more of a reclamation of space.”

We reported on stories in Chile that Faith No More would be playing a festival there in September and now a screebgrab of a festival lineup has surfaced online.

The Hopscotch Friday site has a very well-written review of Sol Invictus though they come right out and say whether the record is any good:

No, the reviewer really did like it and it shows in that passionate writing:

“What seemed like a revolution [the 1990s explosion of alternative rock] and instead has not changed much. It was an illusion to think that music would open, would become less pretentious, more personal and human. There was a different energy, more honest, but that did not last long. Then it became all calculated, stereotyped. Even the underground bands have become predictable.”

He was also asked what fans can expect when Faith No More play with Metallica in Milan on 2 June (we’ll be there!):

“We will play dressed as priests and there will be a nun who will striptease and pole dance.” And Metallica? “Lars will play the part of a nun.”

Just like on their last date in the city in 2009, Faith No More face a late venue change for their 2 June Sonisphere Italy gig in Milan.

The new venue is the Assago Arena (the area outside the city’s main sports and music indoor venue the Mediolanum Forum).
Metallica, Meshuggah and Gojira are also on the bill.

Tickets naturally remain valid for the new venue. Let’s hope it is better organised that the 2009 gig at a different venue which ended up taking place indoors in plus-35 C heat and with toilets overflowing.

The full lineup for Sonisphere Italy has now been confirmed. Meshuggah, Gojira, We Are Harlot and Hawk Eyes will join the San Francisco giants Metallica and Faith No More on the bill for the one-day event on 2 June in Milan.

A trademark labour of love from fnm4ever  – Evidence in 5 languages across the universe and across time. Kudos for how well this was put together:

Some wonderful artwork here from Leon Taylor. FNM as they were at WestFest:

Also from WestFest, a very nice gallery from 13th Floor.

This one from Widebeach is worth more than the one listen:

The Noonday Tune is Superhero. Check out the site here.